One of Improvative Productions’s long-term goals is to be able to produce live theatre shows (that may be fully improvised, or variety shows that include improvisers), especially including guest improvisers and/or improv groups who are based outside of the San Francisco Bay Area. Several groups and improvisers are already in mind for these productions. The goal of this is to connect our community with other improvisers from around the country, and to feature shows that are innovative and inspiring. More details about that will be announced as those shows are organised.

Additionally, Dominica May is a member of other innovative Bay Area-based improv shows. If you’re looking for a unique improvised theatre show, the following offerings can be booked through Improvative Productions.

So You Want a Job 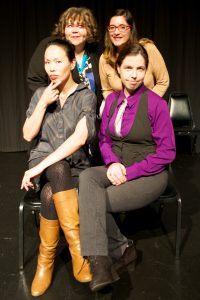 If job interviews make you nervous, then you’ll be grateful you’re not one of the contestants of So You Want a Job. They don’t even know what job they’re all being interviewed for on this reality TV style improv show. The job is chosen by the live studio audience, who then get to vote for the winner, and see the winner’s story played out before them.

Since its creation in January 2017, So You Want a Job has been staged at several theatres across the San Francisco Bay Area including Leela, Moment Improv Theatre, Endgames, All Out Comedy Theater, and PianoFight. It was also staged at IMPRIDE (San Diego), Femprovisor Fest, The San Francisco Improv Festival, Improvaganza! Hawaii Festival of Improv, and AS IF – the Alaska State Improv Festival. 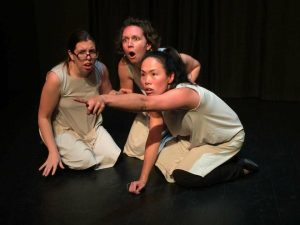 They’re a group of women, taking artistic risks with this form in a way they haven’t seen in other improv shows. Members of the group have developed inspiration from elements of clowning and other improvisers who experiment with silent improv, as well as from the autistic member, who naturally has a different communication style from neurotypical people. They strip back their performance to physicality and emotional vulnerability and connection to get to their primal core.

This show was co-created by the performers Dominica May, Shirley Chan, and Casey Busher, and has been staged at the San Diego Improv Festival.

The Secret Lives of Villains 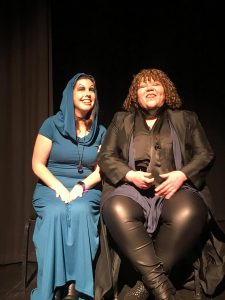 It’s easy to make the mistake of thinking that villains only get their pleasure out of being evil, but that’s simply not the case. We just rarely get to see what their hobbies and interests are, outside of hurting people. Join Diana Brown and Dominica May as they explore the delicate nature of tumultuous villains.

This show has been staged at Louisville’s Damn Good Improv Festival in Kentucky.

Whilst the following shows are not strictly part of Improvative Productions, Dominica May is involved with them and can be contacted for more information. They still come under the focus that Dominica has for this business. 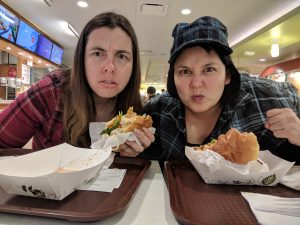 Samantha “Salt” Winston and Deanna “Burn” Rochester hunt the things that go bump in the night. Monsters. Ghosts. Demons. You name it. They’ve probably saved your life without you knowing about it. But hunts are dangerous, and they barely survived the last one. Can they keep it together?

Alissa and Dominica met for the first time in 2012, and first performed together in a mash up show at the 2016 Improvaganza, the Hawaii Festival of Improv. After that set, CIF founder Jonathan Pitts suggested they should do a duo. With Dominica based in San Francisco, and Alissa based in Honolulu, they had no idea how they would be able to make it work, until in 2018 when Alissa was travelling to San Francisco, and the stars aligned to make it happen.

The show was inspired by the TV show Supernatural, because even with that being in its 13th season, both Alissa and Dominica still watch it. The monoscene format was inspired by Bassprov, and Dominica is heavily influenced by admiring Alissa’s primary improv group, On the Spot in Hawaii. 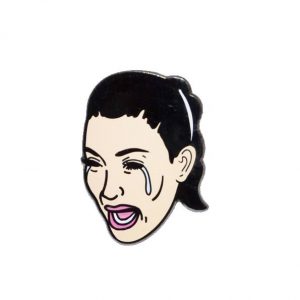