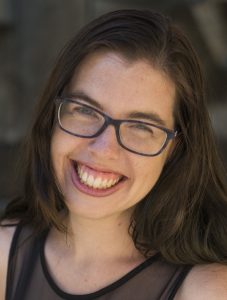 Improvative Productions is an innovative improvisation production business that asks, “Yes, and, what else can you do with improv?”

The founder and sole proprietor, Dominica May, developed this business with the mindset that she wanted to see and develop more innovative and unique improvisational theatre shows in the San Francisco Bay Area, whether it’s developing the shows herself, coaching others how to make it happen, or producing live shows that feature improvisational theatre that encompass this vision, created by improvisers whom she has seen in other cities and festivals she has travelled to.

Dominica’s interest in innovative improv has developed over the last 18 years, when she saw her first live improv in Australia at the Melbourne Comedy Festival in 2000. The following year, she saw Cops on Heat—a long-form improv show in costumes that was an impressive extended show version of a single short form game—several times across two comedy festivals. Her first improv workshop was with this group of performers. In the interim years that followed, she enjoyed improv primarily as an audience member whilst developing her skills in other creative fields, such as filmmaking (receiving a Graduate Diploma in Media Production from Murdoch University, Western Australia), directing (with training from the PAC Screen Workshops, including a workshop on improvised film, in Western Australia), writing (she’s a published novelist and short story writer), and stand-up comedy (performing in Australia and Malaysia, including an improvised stand-up show).

Moving to the San Francisco Bay Area finally afforded her the opportunity to study improvisational theatre more formally. She’s completed ongoing improv training with both Leela and Moment Improv Theatre in San Francisco, and taken workshops with improvisers from around the US and Canada, including but not limited to Joe Bill, Susan Messing, Jonathan Pitts, Carla & Craig Cackowski, Colleen Doyle and Jason Shotts, Dee Ryan and Jane Morris, Rachel Hamilton, Jet Eveleth, and Austin’s Hideout improvisers Kaci Beeler, Valerie Ward, and Jessica Arjet. Most of this training has been consistent with her love of trusting your scene partner and diving deep into the emotions and relationships in improv scenes.

Other notable improv workshops she has taken that have inspired some of the work she has performed on stage include Improvised Movement and Ensemble Building with Nathania Bernabe (Vancouver, Canada), Louder than Words with Garrick Paikai and R Kevin Doyle (Hawaii), and Naked Comedy Workshop with Deanna Fleysher (LA). She has additionally trained in on-camera acting, clowning, and burlesque, all of which are able to add an extra flavor to her improv work.

When it comes to producing quality improv shows that are invited to perform at festivals, Dominica’s knowledge comes from a few different streams—working as a production manager for various improv groups she has performed with at festivals (including Hawaii, Alaska, Hollywood, and SF Sketchfest); attending improv festivals in person to see what else is out there and what’s invited to festivals; conversations with other producers about what they look for when selecting acts; and being a member of the Femprovisor Fest Production Committee in 2017-2019.